Thanks to all who attended the AAVENGE April Showers Doggie Wash hosted at Happy Dog Bakery. Even though it was a gray day that threatened rain....we had no worries due to plenty of room inside Happy Dog Bakery. Dogs were bathed, nails clipped and PAINTED...the girls had a rainbow of colors to choose from...then when they were all dolled up, I had the pleasure of photographing them! Here are just a few...but if you want to see the whole photoshoot...just click my Photo Gallery. Then if you want to see products using these pictures, click over to AAVENGE April Showers 2010.
Proceeds from this fundraiser went to AAVENGE and the Rock Island Student Council.


This is Archie. He is a mixed breed dog being fostered by Allison and is up for adoption to the right family. Archie was the life of the event showing everyone all the tricks he knows and showing off his frisbee skills. Lucky family that gets this pooch! This is Carson a too cute West Highland White Terrier. We first met Carson at the photoshoot we did at Teagarden Pet Salon for the holiday portrait week we did there in 2009. This is Evil...perfect name for this rambunctious Long Haired Chihuahua. We got some great shots of this cutie! Meet Taz a Chocolate Dapple Dachshund. This little guy sure knew how to pose for the camera. 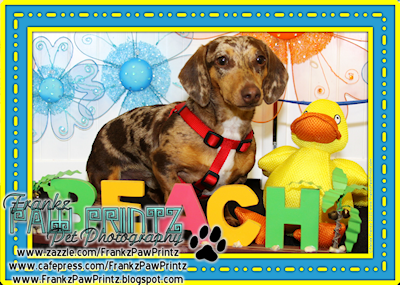 And Tigger...this was an AAVENGE dog that found a forever home last year. We were so happy to see him again at this event! This is Romeo a beautiful Pomeranian that is owned by Natalie Tolomeo from CBS. Posted by Renae Frankz at 11:14 AM No comments: To see all the products available with this design, please visit my Zazzle Store. You'll find everything from mugs, sweatshirts, magnets, to stationary, postage stamps and binders.

Posted by Renae Frankz at 12:34 PM No comments:

Come spend your Sunday with us at Happy Dog Bakery for a special fundraising day benefitting AAVENGE and the Rock Island Student Council. Bring your leashed pet with you for a doggie wash.

We'll have lots of food like Hotdogs, Chips and brownies.  AAVENGE will have their new t-shirts available....possibly even some tote bags.

Posted by Renae Frankz at 11:26 AM No comments:

City of Moline - Gone to the Dogs Easter Egg Hunt 2010

Again, we had perfect weather for the dogs to get their Easter Egg treats. This was the City of Moline's 1st ever Dog Easter Egg Hunt held at Greenvalley Dog Park. I got some great photos of the dogs while they were waiting for the hunt to begin. To see the entire photoshoot visit my Photo Gallery. Lots of great crowd candid shots!

Here are a few for you to see:

This is Lilly a 1 year old female beagle. I took lots of shots of this little yorkie puppy. This puppy to a liking to one of the largest dogs at the hunt ... a gorgeous grey Neopolitan Mastiff. I got some cute shots of them playing together. This little Corgi got to the hunt just in time....loved her tutu! Here is Snoop the Neopolitan Mastiff. We had lots of beagles....this one just wanted to play and play. Who can resist this Easter Puppy? Don't forget to stop by my Zazzle Store to see the cute products the photos from this event created.

Posted by Renae Frankz at 1:03 PM No comments:

City of Moline Gone to the Dogs Easter Egg Hunt 2010

Why should parents of two-legged children have all the fun when Easter rolls around? Moline Parks and Recreation is hosting their first ever Gone-to-the-Dogs Egg Hunt! Dogs and their owners are invited to sniff out egg shaped treats. Plastic eggs contain prize numbers. Every egg contains a doggie treat with some also containing special prizes. Egg hunters should bring their own basket or sack to collect the eggs.

Owners are encouraged to dress their dogs in their Easter finest to strut and wiggle their tails in the Easter Bonnet Parade. A prize will be awarded to the canine wearing the best designed bonnet.

I'll be there, set up to take portraits of your pet in their Easter Best!

Dogs must not be aggressive

Dogs must be kept on a leash during the event

Owners must stay with their dogs at all times

Photos that I take on this day will be available in my Photo Gallery. Feel free to go there and add your email in to receive announcement when photos are posted!

Posted by Renae Frankz at 4:19 PM No comments:

For a while it looked like the rain was going to squash the Doggie Easter Egg Hunt, but at the last minute the rain stopped and opened up a beautiful sunny sky. A little chilly and a little windy, but that was not paid any notice once the hunt began.

We had a great turn out for the Humane Society of Scott County event and I was able to take a boatload of photographs. 10% of our sales will be donated to HSSC. If you click over to my Photo Gallery, you can view the entire photoshoot. Here are a few to give you a taste.... Thanks to Kim Kline Smith for her help by handling the on-site printing of the photographs.

Just a little while ago, Kim alerted me to the fact that QC Online did a write up of the event and that we were written about in it.

There were treats to be had, and the treat hunters meant business.

"Go ahead and line up!" said Pam Arndt, executive director of the Humane Society of Scott County as she stood on a small step ladder among scores of dogs and more than 200 people Saturday afternoon at Davenport's Lindsay Park.

"Large dogs, small dogs," she said. With each category of canine she motioned with her hands in another direction.

"So the big ones won't trample the little ones," Ms. Arndt had explained a few minutes before.

A wave of people and dogs rolled forward into the flat grassy field, looking for the egg-shaped dog biscuits that were the prize of the Humane Society's annual Doggie Easter Egg Hunt.

There were big dogs and little dogs. There were shaggy ones and short-haired. They nosed forward through the fresh spring grass, gobbling the cookies they found.

Many of the human participants were dragged along behind their eager pets. Others managed to keep control, guiding their animals to the treats.

"C'mon! Keep looking," one owner said. "Are you hunting?"

"Find the treats," said another.

Some people gathered armfuls of the treats so their pets could have them later, and there were plenty to go around.

Ms. Arndt said there were hundreds scattered through the grass.

"They are from Happy Dog Bakery," she said. "They made them especially for today."

The event began at 1 p.m. Within five or six minutes, there was not a treat to be seen in the grass.

Off in a corner, dog portraits were being taken. The animals were dressed up with bunny ears and pale yellow bandanas

The owners and photographer Renae Frankz tried valiantly to hold short canine attention spans long enough to get off a few good shots.

They appeared mostly successful in getting doggy eyes and ears pointed in the right direction long enough to get a picture.

Kristin Harrington was out with Fritz, one of her adopted greyhounds. She has been to dog Easter egg hunts before, but Saturday was her first time at the Scott County Humane Society's event.

"Fun. Lots of fun," she said of the hunt. "Greyhounds are my thing, but I like seeing other breeds, too."

She and Fritz had gotten about ten cookies, though the lanky dog had not eaten any at the park. Posted by Renae Frankz at 5:02 PM No comments:

Currently, I have almost 100 Dog Breeds that are represented in my designs. If you do not see your favorite Breed, please contact me and I will make sure to create it for you. Or, If you would like to see YOUR OWN PET inside any of my designs, let me know and I'll get it done at no additional charge to you.

But wait, there's more ... Do you or your pet have a Birthday coming up? Would you like to receive a personalized Paper (not digital) Greeting Card in the mail? Simply send me your address by clicking on the Contact link. Better yet, this will also add you to my mailing list to receive holiday postcards through the year!

Help Spread the Paw Printz....
Cut and Paste Code into Your Page!

I am happy to exchange links. Just place the above link into your website and send me an email with where it appears and the info for your link.